Holland Lops are a dwarf breed. That being said, not all Holland Lops have the dwarf gene. Those that do not are known as "false dwarfs", or "normals". True dwarfs have 1 dwarf gene. Often, normals will have longer back feet, a longer head, and a bigger body (usually over 4lbs, but not always). Their body is just overall longer than a true dwarf.
True dwarfs are smaller, have rounder bodies and heads, and make better show bunnies.
Dragonfly's Gracie, the orange doe above, is a normal, and so is Blue Storm's Sir Lancelot, my buck. If I were to breed the pair of them, they would only have normals, or false dwarfs. 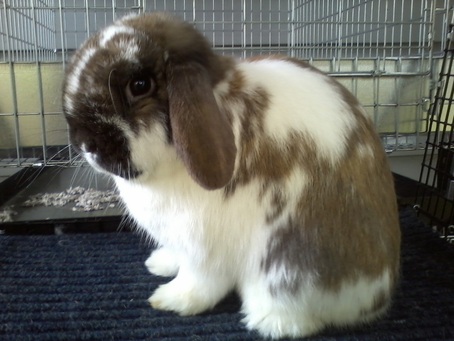 If Holly's Cinnamon to Sir Lancelot were to have a litter, with one false dwarf and one true dwarf, their babies would most likely be 50% true dwarfs and 50% false dwarfs.

If you breed two true dwarf rabbits together, you will get (generally), 50% true dwarf, 25% false dwarf, and 25% peanuts.

What are peanuts?
Peanuts are babies that inherit two dwarf genes. They lack the proper gene to grow, so they wither away within a few days. They basically become TOO dwarfy. They will always die.

This is why I like to breed false to true. You get the same amount of true dwarfs, on average, which is 50%. And that way, you have a higher percentage of all the babies in the litter surviving; you have a higher chance of no fatalities.

I'm planning on showing my little show does, like Cinnamon, once she comes off her litter, and one of Cinnamon's daughters that I plan to keep. Sure, I don't have a buck that I can show, maybe he can't win any legs (awards), but I'd rather have that than 25% of babies that will die per litter.
Wouldn't you?