Can A Rabbit Really Be Litter-Trained?

Yes! Rabbits are very cleanly animals and are very smart. It's actually very easy to litter train a rabbit, because they only urinate/defecate in one place anyway, whether or not you provide them with a litter box. Not many people think of a bunny running around the house and litter trained like a cat when they hear "pet rabbit". Are you considering getting a bunny, but do you want it to be a part of the family? A pet that you can get to know personally, and that you can enjoy? Read on!

WHAT KIND OF LITTER BOX SHOULD I GET?
There are many different litter boxes, and as long as your litter box fits your rabbit, cage and habitat, it should suit just fine.
Corner litter boxes are typically too small for even the smallest rabbit breeds. I used to use this box, and my rabbit, Elsie, urinated over the side when she became an adult because she outgrew it quickly.

Corner litter boxes, however, can also be bought with a grate on top. These are generally bigger and much cleaner for the rabbit. The rabbit doesn't sit in its poop or urine, so the rabbit and the habitat stays much cleaner.

The litter box I am currently using for my house rabbit is basically like a cat's litter box, with high sides (keeps bucks cleaner), and a cut out in the front for easy access, especially as the rabbit gets older. I bought this one at PetSmart.
Make sure that the litter box you get fits the cage. Since your rabbit will be a house rabbit, it doesn't matter if the box takes up most of the cage room, but the rabbit should still have room to lie down, stand, and walk around. 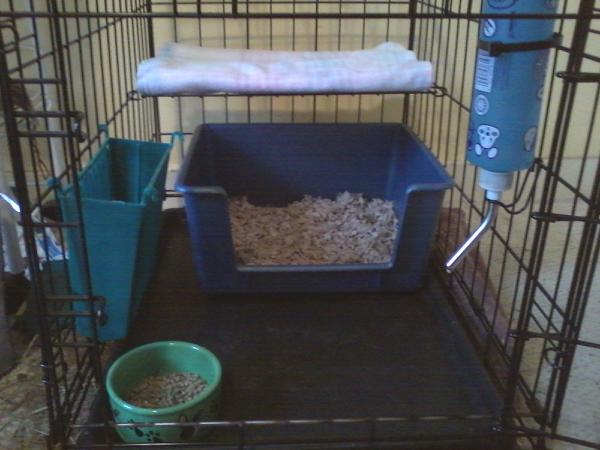 WHAT KIND OF LITTER SHOULD I GET?
Inside the litter box you will want to use some kind of litter to soak up urine. If your litter box has a grate, then using something like pine shavings is fine, as long as the rabbit can't touch it. Pine shavings and ceder are poisonous to rabbit on contact.
There are different kinds of litter. Most litter are little pellets placed in the box that soak up urine and feces. Then there's "bedding", which is comfier and encourages the rabbit to be in the box more. However, the rabbit may have a harder time learning to use the box if bedding is in it, because he may choose to use it as a bed instead.
Don't use cat litter or clumping litters; rabbits like to eat their litter occasionally and this can clog their intestines and create problems.
Don't use newspaper, as it causes the urine to puddle as well as splash back up on the rabbit and give it a messy bottom.
Don't use a litter that will be found anywhere else in the cage or house. If the rabbit is out playing and discovers the same litter that is in his box, he may urinate on it just like in the litter box.
I use CareFresh, it is considered a bedding but my rabbit loves it. It comes in many different colors: bright blue, pink, purple, confetti, brown, neutral and bright white. CareFresh can also be flushed down the toilet in small amounts at a time.

SO HOW DO I LITTER TRAIN A RABBIT?
When you bring your new rabbit home, place it in the cage you have provided and leave it alone. The rabbit will not be able to start roaming your house right away, and will appreciate a secluded place to call its own for the first day or so. DON'T put the litter box in with the rabbit just yet. It will not understand what it's meant for and could develop bad habits with it.
Watch to see where your rabbit uses the bathroom. Yes, they will go potty on the floor if you don't provide them with a cage to "go" in. Don't pay attention to where it leaves its droppings, but on where it urinates. You'll want to place the litter box directly on the spot the rabbit chose to urinate on. The rabbit will remember where it used the bathroom last by the smell and will go in the same spot most of the time.
After the rabbit has been in its cage and using the litter box nearly every time it "goes", let it out to play. Keep your eye on the rabbit at all times - most likely it won't go back into the cage to use the litter box the first couple times being out.
Keep a close eye on your rabbit. It may try to urinate on the floor while it's playing. If it does, gently place the rabbit back in its cage until it uses the litter box again. This will help your rabbit associate going to the bathroom with using the box.
Clean the litter often (once or twice a week), but not every time the rabbit uses the litter box. I usually replace half of the litter every other day. If it never smells like the rabbit's urine to the rabbit, it will choose a new bathroom. This is why you don't want to change all of the litter except for once a week.
When your rabbit is using the box reliably, you can let it out more often and for longer periods of time. As you expand your rabbit's play area, and it spends more and more times out of its cage, increase the number of litter boxes used. Have one in every room the rabbit is allowed to play in. That'll decrease the chances of the rabbit choosing another bathroom because it's distracted.
Getting the rabbit to leave it's droppings in the box will take more time. Rabbits scatter them to mark their territory. While the rabbit is young, it may leave them in the litter box almost every time. However, once it reaches sexual maturity at 4-6 months, it'll scatter them around its play area to let other rabbits know that it lives there. Generally, spaying or neutering your rabbit will make it stop marking its territory and wanting to mate.
Pick up the droppings found around the house or in the rabbit's play area. Put them back into the box. If the rabbit never sees its droppings anywhere but in the litter box, it will begin to only defecate in the litter box.

WHY WOULD I WANT TO GET A HOUSE RABBIT?
Maybe you don't want a dog or cat, yet want something more active, playful, friendly and cuddly then a fish. Holland Lops especially are sweet, cuddly, and crave attention. They are very affectionate. They each have their own unique personality, and my house rabbit acts like a puppy! She is so energetic and all over the place at the same time, yet she never ceases to ask for attention and pats.
Or maybe you just want a rabbit and don't want to cage it up outside. House rabbits have an advantage over their hutched cousins: they get out more of their energy, and especially for Hollands, get to spend more time with the family they love.
So my question is: Why NOT Get a House Rabbit??