Rabbit coat color genes can be confusing and sound like a bunch of mumbo-jumbo, but once something just clicks, it all begins to make sense!
I've studied rabbit coat color genes for a couple years now. I'm fascinated by it. Being a rabbit breeder, it's important to know which colors could produce what, what genes are recessive and which are dominant. I also find it really fun to try and figure out my rabbits' genotype.

WHAT IS A GENOTYPE?
"A genotype is a list of symbols denoting the set of genes that an animal has. In other words, a genotype is a "gene code", or a description of the rabbit's genes written in symbols." (from About Bunny Colors, by Ellyn Eddy).
There are 5 major coat series that determine the coat color of a rabbit. They are: A B C D E.
Every rabbit on the planet has a coat color genotype. The wild bunny color is a chestnut agouti, and it's the most dominant coat color there is. That genotype looks like this: AA BB CC DD EE.
Each rabbit has dominant and recessive genes. The first gene in each pair (such as the first big "C", in the gene series above), is the dominant gene. The second (the second "C", right next to the first), is the recessive. Most wild bunnies don't carry any recessive genes. Thus, their genotype looks like the own above because they carry what they look like. They are only dominant genes. Thus their mates are those dominant genes, and their offspring are those dominant genes.
A recessive gene can't carry a dominant gene. The gene aA Bb Cc (ect), is incorrect because the recessive gene, (a), is written before the dominant gene, (A). Each letter stands for a different color or pattern. The letters are just symbols for the actual gene. We'll tackle what these symbols mean in the next blog post.

What about this genotype? Aa Bb Cc Dd Ee
That is the same color as the one above, chestnut agouti, because its dominant genes are the same. Thus, it's the same outward color. But see how the second letters per series are different? This rabbit carries recessive genes. It's offspring could be a different color then itself, or even then its mate, depending on its color.

The (A) series (remember, letters are only used as symbols for the gene), controls pattern in the rabbit's coat color. Where and how the colors are arranged on that rabbit. There are three genes in the (A) series, agouti, tan, and self.

A = "Agouti Pattern" The most dominant gene for this series. Therefore, this gene can "carry", one of the other two (A) genes but neither of the other two (A) genes can carry this one. Agouti patterned rabbits have usually have white or cream markings on their belly, around their eyes, on their nostrils, under their jowls, inside of their ears, underside of the tail, and inside their legs. Any variety that has ring color (bands of color on a single hair shaft), is agouti. Agouti often have darkundercolor near the base of the fur, next to the skin. Agouti colors often have dark ticking. Examples include but are not limited to, chestnut, opal, chinchilla, squirrel, lynx. Orange, cream, red, frosty, steel and a correct tri-color will also be agouti, but may not show ring color or ticking. 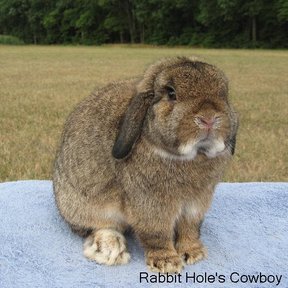 Chestnut Holland Lop. Photo Credit Google
a(t) = "Tan Pattern" Dominant over self pattern, below, but recessive to agouti pattern. Tan pattern colors have a solid color over the back - with lighter markings of cream, silver, or red (such as in the tan breed). Tan patterned markings are found everywhere agouti markings are found (as well as a triangle of lighter color over the base of the neck), but the pattern never exhibits ring color. Tans may show some lighter ticking over the sides, but never over the back.
Examples are otters and martens. In Holland Lops, only the otters are showable. 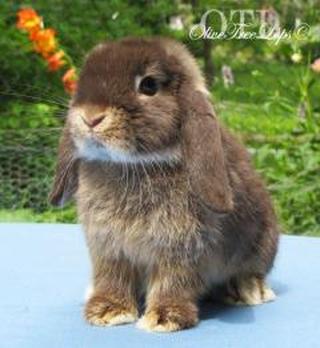 Chocolate otter Holland Lop. Photo credit Google
a = "Self Pattern" Recessive to the other two genes, thus (a) cannot carry (A) or (a(t). A self patterned rabbit will never be able to produce an agouti or tan-patterned rabbit, unless its mate is a higher gene. Self patterned animals have the color of the fur carried all the way down the hair shaft. They are one universal color. No ticking, ring color, or any bands of lighter color. Self patterned colors may have shading. Examples are black, blue, tort, Siamese sable, ect. 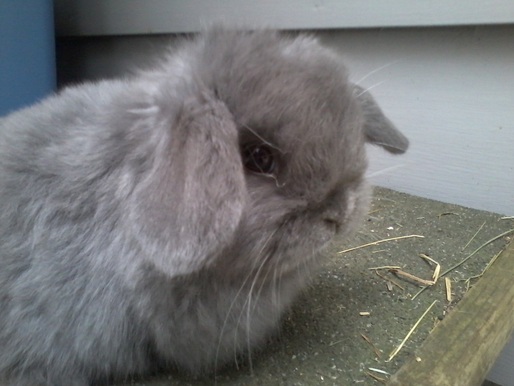 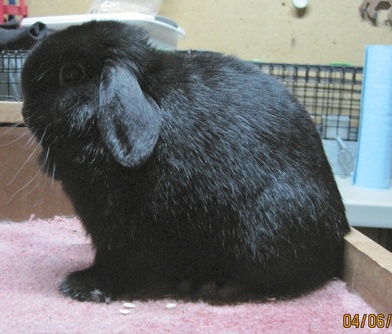 Black Holland Lop. Pic found on Google
The (B) series is much more easy to understand than the (A) series! It's much simpler, with only two genes in this series. Dominant (B), and recessive (b).
Every rabbit, no matter the color, is either black, blue, chocolate or lilac based. A Siamese sable is generally black-based. In Holland Lops, there are black, blue, chocolate and lilac torts, and all are showable.

B = "Black" All black or blue based colors are (B). Examples include black, blue, black tort, blue tort, sable point, orange, cream, opal, and many, many more. 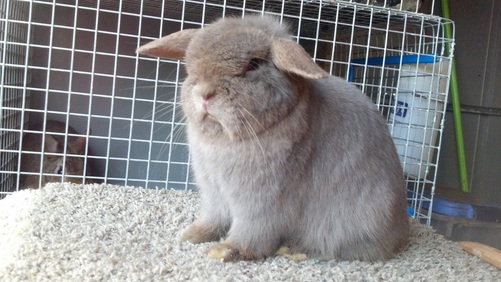 Lilac Holland Lop. Photo found on Google.
Before the (D) series is actually the (C), series, but because we just did the (B) series and (B) and (D), work so well together I'm going to skip (C) for now.
(D) and (B) actually work together to change a black to a blue, and a chocolate to a lilac. Like the (B) series, there is only 2 genes in this series.

D = "Dense" Dominant over (d). Colors usually have brown eyes. All black and chocolate based colors are (D). Examples are black tort, chocolate tort, black, chocolate, ect.
d = "Dilute" Recessive over (D). Colors have blue-gray eyes. Changes a black or chocolate to a blue or lilac. A dilute color has the same color pigments as its dense counterpart, but the pigment granules are spaced unevenly, thus creating a less intense appearance. Examples are blue tort, lilac tort, blue, lilac, ect.
If a rabbit had the gene B? D?, it would be black-based. If it had the gene bb dd it would be lilac-based.
So here's a question. What color-based (lilac, chocolate, black or blue), would B? dd be?

Now none of this came from my own brain. I would like to thank Ellyn Eddy of Rabbit Smarties (you can Google it), for her book, "It's Easy as ABC: About Bunny Colors", a book on rabbit coat color genetics and a practical guide on raising colors in your rabbitry and applying what you know in rabbit coat color genetics to get an accurate picture of all the colors you could produce with a pair of rabbits.
Some notes:

~What's with the question marks? I put question marks next to the letters to say that with that rabbit, we don't know what it carries. We don't know what its recessive gene is, or even if it has one at all. the recessive gene cannot carry anything, so that's why there's two dd (for example), and a question mark after the dominant gene, I'll talk about finding out what genes your rabbit carries and more on recessives in another post. This will be a long series.
~The reason why I say "blue-based", or "black-based" (ect), is because those aren't the genes for just a pure blue or black; well, they are, but they're also for each individual blue- or black-based (ect), color like black otter, blue otter, black tort, blue tort, orange, cream, Siamese sable, smoke pearl, chestnut, opal, squirrel, chinchilla, a lots, lots more.

You may have noticed so far that all the pictures I'm including are of Holland Lops. However, all the colors I mention can be found in every breed - they just aren't necessarily "excepted", or "recognized" with the ARBA.
The (C) series controls how much what what colors of pigment are found in the coat. Affects both the color, and the placement of the color.
As you read the following descriptions, notice that the further down the hierarchy you go, the lighter and lighter the color becomes. This is because more and more pigment is being removed from the coat.

C - "Full Color" Dominant over all the others. Normal amount of pigment over the whole animal. Examples include black, orange, chestnut, otter, tortoise (tort), and their blue, chocolate, and lilac counterparts. 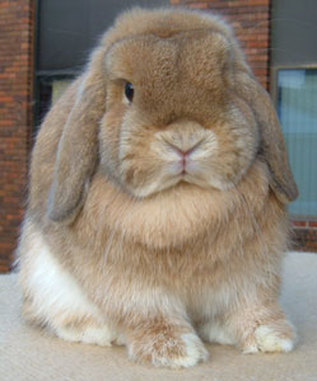 Cchd - "Chinchilla Dark" More commonly referred to as the Chinchilla gene. Colors often appear silvery because this gene removes the yellow pigments from the coat. Where a full color variety has orange or fawn fur, the chinchilla color has pearl or white fur. Examples include chinchilla, squirrel, silver marten, magpie, and more. 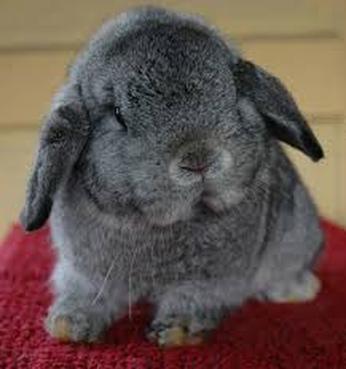 Cchl - "Chinchilla Light" More commonly referred to as the Sable gene. This gene creates the shaded colors. All colors with this gene are darkest on the points (feet, nose, ears, tail - the "ends" of the rabbit), and shade to a lighter color on the flanks and over the chest. Examples include sable point, Siamese sable, smoke pearl, seal and more. 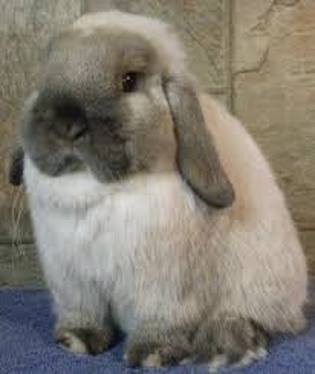 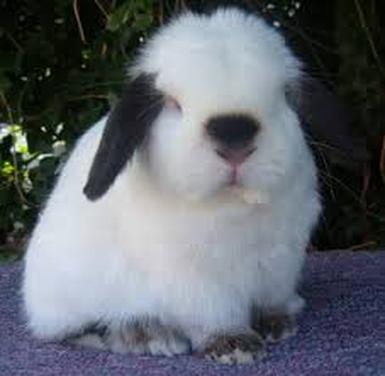 c - "Albino" The most recessive gene in this series. Albino, or Ruby-eyed-white (REW), are all white and they have red eyes. Here's an interesting fact: ANY rabbit with the genotype (cc), will appear REW. Why? Because the (c) gene removes ALL the color pigment from the fur and eyes. This is true no matter what the rest of the genotype is. The genotype AABBccDDEE is a REW rabbit. Same with the gene aabbccee. 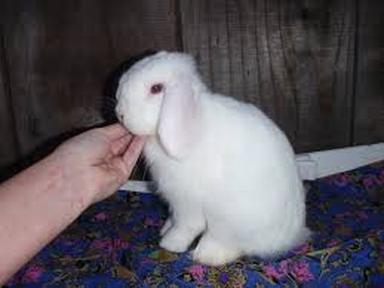 The (E) series is unique because the most common gene is not actually the most dominant. There are 5 genes in the (E) series, and the most common one is also semi-recessive. The (E) gene controls how far up the dark pigment extends. The (E) genes are linked chemically to the (A) genes, and many (E) series genes won't show their "true colors" ;) unless they are on an agouti coat. Let's dig right in, then, shall we?
Ed - "Dominant Black" It's a full extension of dark pigment; it brings the black (or blue, chocolate, or lilac), all the way up the hair shaft (which, by the way, is hollow). (Ed) will make a chestnut coat look black, an opal coat look blue, and so forth. The "blacks" brought on by this color are very deep in color and are less likely to have scattered whites than a true black. Things may change someday, but for now, (Ed) is rarely found, so it's safe to assume your black (or blue, chocolate, lilac), is a true black (or blue, chocolate, lilac), unless it meaninglessly throws (produces), agoutis when bred to a true self.
Es - "Steel" This is a lesser version of (Ed). (Es) carries the dark pigment mostly all the way up the hair shaft, but leaves a little light color at the tips of the guard hairs. This produces the steel variety when coupled with the agouti gene. Since self and tan patterned already have single-colored hair shafts, there's no light color at the end of the hair tip for the steel gene to leave. Thus, the steel gene doesn't show on (aa) or (at) patterned animals. 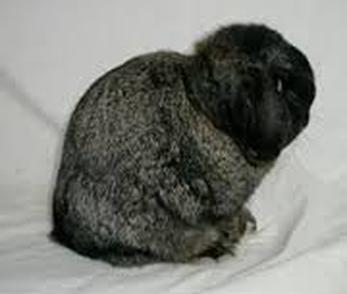 E - "Normal Extension" Dominant over lower (e) genes, recessive to those above it. Most colors are normal extension. 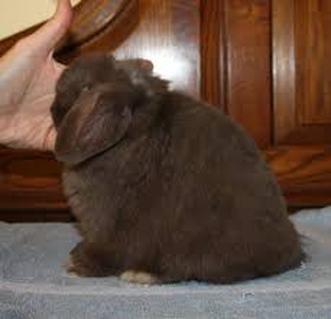 ej - "Japanese Bridling" When you see the (ej) gene, think "harliquin", or "tricolored". The (ej) gene creates the colors called Japanese, magpie, and tri-colored. The (ej) gene segregates the dark brown and yellow pigments, putting them on separate hair shafts. The (ej) gene only works properly on rabbits with the agouti gene. 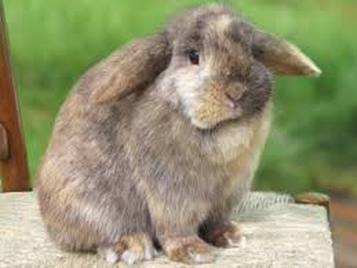 e - "Non-extension" Most recessive gene in the (E)-series. On the other end of the spectrum from (Ed), (e), hardly shows any dark pigment at all. Only the orange/yellow pigment shows, thus, non-extension colors are those that are yellowish, such as orange, cream, red, frosty and sable point. 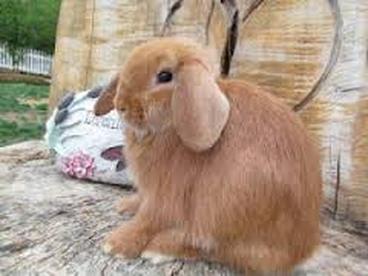